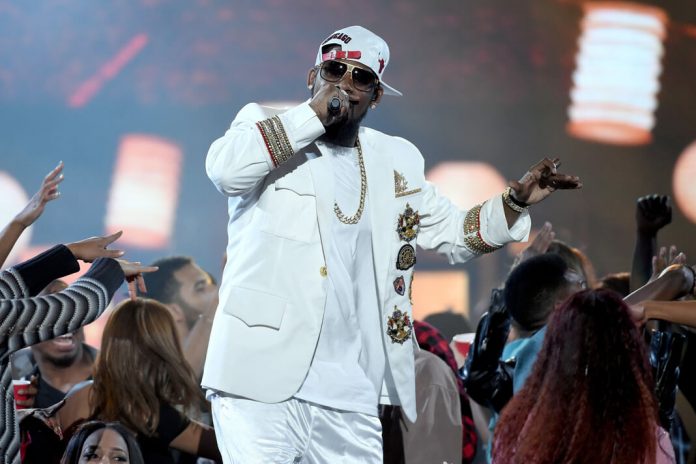 To be a woman who loves hip hop at times is to be in love with your abuser. Because the music was and is that. And yet the culture is ours.

Robert Kelly is a harm-doer. He rapes children. This is documented and indisputable. And yet, he still holds an iconic place in hip hop. He is the Pied Piper of the Love Slide, the Bump-n-Grinder that believes he can fly. I’d wager that every Black person in the US knows at least one R. Kelly song by heart.

And that’s a problem.

Last night’s Soul Train Music Awards was a walk in nostalgia. 80s and 90s babies sang along to the medleys of Jill Scott and Babyface. But a schism emerged when Rapist Kelly closed the show. I cringed when Erykah Badu called him her brother. Motha Goddess — who was recently honored at Black Girls Rock — endorsed R. Kelly, thereby endorsing his atrocious acts of violence against Black girls.

Though I was disgusted by such a display, I wasn’t disgusted enough to change the channel. I wasn’t upset enough to suppress my excitement as he sang those hits that define my love of hip hop and Black musical expression.

I’m uncomfortable in acknowledging that Rapist Kelly’s artistry is a piece of me. That his music brings me back to those uncomplicated schoolyard days — before Sallie Mae ravaged my credit score, and Black Lives Matter informed my socio-political value system. “I Believe I Can Fly” was my kindergarten graduation song. “Step in the Name of Love” was a staple at family BBQs. “I Wish” conjures re-memories of my 9-year-old self eating 50-cent honey buns, drinking Tropical Fantasy, and playing double-dutch.

But I recognize my selfishness in relying exclusively on my nostalgia in shaping my perspective of Rapist Kelly.
I won’t speculate on what Rapist Kelly means to his survivors. But, it wouldn’t surprise me if his image and artistry are a reminder of unfair scrutiny, extreme violation, and immeasurable harm.

In my pro-Black feminist value system is full of both clarity and ambiguity. I am clear that white supremacy is the ultimate evil that manifests itself structurally, institutionally, and socially. I am clear that white supremacy and anti-Black resonates in the hearts and minds of many, and guides public, economic, and social policy in destructive ways.

And yet, the ambiguity in my value system is evident in my intersectional analysis. That my Black, queer, female-bodied self is whole, yet fragmented in this single-issue clickbait and soundbite world we live in.

I see it in my careful handling of Black men who harm Black women. I see that I take extra precautions in calling out Black men who are beholden to and legitimize misogyny and misogynoir. That “nuance” becomes my best friend when Black men — especially those with class privilege and access — are harm-doers, and that I am hesitant to speak publicly about them.

I am envious of Black women whose pro-Black feminism is more clear than ambiguous.
Tweets were aflame when R. Kelly (dis)graced the stage last night. Some welcomed his return, while most raised his violent aggressions. In between was me; conflicted and annoyed that I could not consciously or holistically enjoy his performance without my pro-Black feminist antennas whirring with prospective think pieces and analysis.

I was ashamed of myself that I could not be fully angry or fully entertained. I was in the middle; not exactly on the fence … THE MAN IS A RAPIST AND NO ONE SHOULD OR CAN MAKE EXCUSES FOR THAT … but not ready to ride out either way.

In all pockets, I find there’s an unfair belief that Black women must have their shit together at all times and in all ways. That we’re too strong to be flawed. But I believe that Black women are allowed to be conflicted, and that we’re allowed to work through our conflicts without judgment or external expectations.