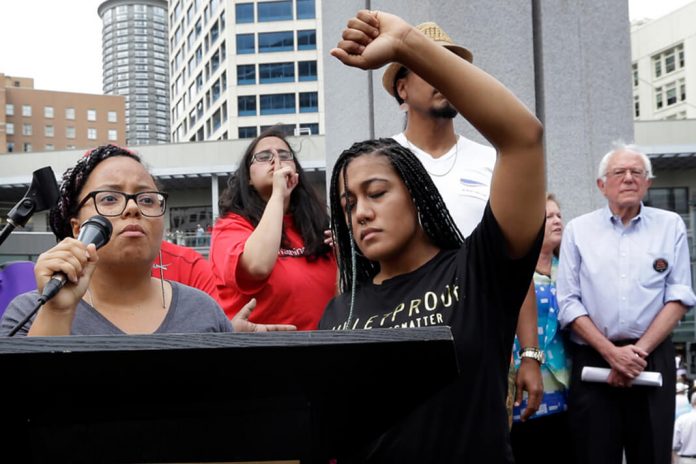 Ashley Williams, a Black Lives Matter activist from Charleston, South Carolina, disrupted a private high-dollar Hillary Clinton event, and demanded that the leading presidential candidate answer for her direct hand in criminalizing and incarcerating a generation of Black people.

As a fellow Black Lives Matter comrade, my feelings of Black Pride were greater than my visceral trepidation. I was proud of the youth activist for boldly confronting one of the most powerful political operatives in the global economy. I was humbled by Ms. Williams’ resolve and resiliency, and emboldened by her love for her People.

But I was also afraid for Ms. Ashley Williams. I knew that anti-Black vitriol from white racists would be hurled her way, while Bernie stans would capitalize off her courage in an effort to promote their substandard political ideals. A quick glance at any comments section verified my fears.

But when Black people are invested in — and in defense of — the system that hates and devalues us, my anger is only matched by my fatigue.

Frustratingly, some Black commenters were reviled by the disruption, and said that thorough racial justice will only be realized by being nice and polite to a white politico like Clinton. Others impugned the disruption because it distressed white people, thus implying that our survival is dependent on a surplus of white feelings.

None of these excuses are original. We heard the same bullshit when Mara and Marissa disrupted Bernie Sanders in Seattle.

When Black activists shut down highways, bridges, malls, train stations, and airports to raise awareness about anti-Black violence and compel socio-political technicians to get on their act-right, the last thing we care about is convenience.

I blame the nonprofit industrial complex (NPIC). Thanks to the massive scheme to control the hunger of the masses, NPIC has co-opted social justice issues, and rebranded in a manner that’s corporate-friendly. As a society, we have forgotten the grit of social justice advocacy. We have normalized the mistruth that the fight for equity and justice is paved through paper-pushing.

Corporate dollars fuel NPIC, and with this coveted funding comes respectable regulations. “Leaders” of major nonprofits are hesitant to mobilize the masses and late to show up, but are quick to appear before the cameras when the streets get hot. They’re the first called to tranquilize righteous anger with carefully crafted talking points, and hastily secure meetings with the oppressors to strategize about how best to revert back to the violent status quo.

With careful messaging and robust reputations, uninvolved spectators believe that protest is best ushered by these organizations, and wait idly for that inorganic and insincere call-to-action. When disruptions occur outside of this deliberate neoliberal standard, folks unfamiliar with the dynamics of NPIC respond unfavorably.

Don’t be confused. Organic people-led protests and disruptions are a significant path to socio-political change. Don’t let a well-oiled suit tell you different.

To Be A Black Girl …

Here Are 5 Easy Ways to De-Stress