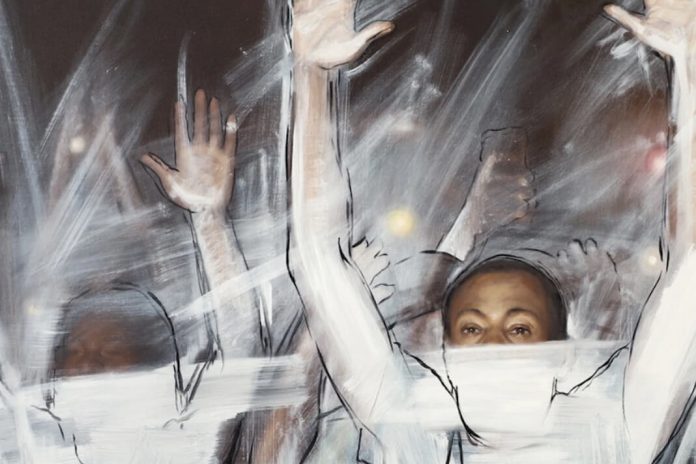 On a large scale, I find that Black folk refuse to dream radically. We have vast imaginations and deep yearnings for freedom and liberation, and yet … we remain stunted within the confines of oppressive systems.

When the prolific Ta-Nehisi Coates disclosed on Democracy Now! that he is voting for Sen. Bernie Sanders despite disagreeing with the candidate’s position on reparations, I exhaled a gust of exasperation. On his reasoning, Coates remarked

For Coates, Sanders “is the best option that we have in the race.” And this may be true, depending on one’s pro-Black political value system. Sanders is miles ahead of the presidential field in regards to campaign finance reform, health care, and college affordability.

But my pro-Black value system doesn’t fit on the mainstream bookends of reactionary conservatism and liberal progressivism. I exist on the socio-political spectrum between reform and abolition. And in most occasions, I am more an abolitionist than I am a reformist. I do not believe in marshaling resources or expending labor for bullshit incremental bureaucratic changes that can be easily unraveled by the stroke of a white rich man’s pen.

The growing wave of self-professed #BlackBerners will be a crucial determinant for Sanders’ underdog campaign. He desperately needs more support from Black voters, and celebrities and culture-makers like Cornel West, Shaun King, Killer Mike, and Ta-Nehisi Coates are valuable assets in persuading Black voters to support the firebrand democratic socialist.

Hillary Clinton leads among older Black voters. Older Black voters, I imagine, are supporting her because the Black political establishment is. Name recognition is also a factor.

And yet, Black support for Clinton is literally voting against pro-Black communal interest. She has a longstanding, researchable track record of disenfranchising Black people, pushing Black people into poverty, and fattening the unaccountable criminal justice system to the point where private prisons are mainstays in, and lifebloods for, many local economies. Michelle Alexander, noted author of The New Jim Crow writes about these convoluted dynamics in a recent article for The Nation.

This presidential season reminds me that Black folk are afraid, unwilling, or unable to dream radically.
In the era of Black Lives Matter, where mass popular uprisings against the police state are fixtures on the 24/7 news cycle, I fear that millions of us are refusing to leverage our collective power to dismantle the very systems we are FOREVER fighting against.

There are many reasons why Black folk refuse to dream radically. There are tactical reasons; many Black folk are closer to reform than abolition. They believe in “engaging” and “integrating” within the system to bring about widespread pro-Black socioeconomic muster. Which is a belief I wholeheartedly disagree with, but respect as valid. On a micro, local scale … it could work …maybe.

However, in my political reality — when I’ve seen this mindset deployed in my neighborhood — I’ve “engaged” with local politicos that spewed the the basic pro-Black jargon, but voted for 1,300 more police officers to roam the streets of NYC.

On a more personal level, I believe Black folk refuse to dream radically out of necessity for survival. We inherently police ourselves to maintain our friendships, lovers, and paychecks. We don’t want to appear threatening or “crazy” to white power structures. We want our white friends to like us, and our white bosses to promote us. We want our white colleagues to trust us and not be afraid of us. So we limit ourselves to their expectations.

We fail to internalize the truth that white expectations of Black bodies are rooted and executed in racist violence.
Our desire for their “approval” is exactly what white privilege is and how racism works. Racism is defined by an uneven power relationship in which white people are the masters of our destines, and we are locked to their whims.

And sure, your white friend might desperately try to impress you by spittin a Drake verse, but their livelihoods don’t depend on their ability to have a token Black friend. Be clear … your tokenism gives them license to say fucked up shit about Black people to their white friends when you’re not around to hear it.

I also believe there’s a misconception of what Black radicalism is. The term “radical” is thrown around by pundits and politicos to describe fundamentalist Islamic terrorists, and thus, the term has taken a meaning that is Islamophobic and misunderstood. Throw in the wide reach of the volatile Patriot Act, and folks get rightfully scared into submission.

And the root is anti-Black racism. Our entire social paradigm is designed and managed by it.
My radical vision is for Black people all around the world to grasp at the root. To refuse to engage with systems of oppression that do not serve our collective, long-term interests. My radical vision is for us to self-determine how we shape our world; to build masterfully, cohesively, and inclusively. To create sustainable and accountable institutions that suit our needs and identity.

And we have evuh-ree right to do so. We don’t need to trap ourselves in the anti-Black cycle of wash-rinse-repeat.

Of course this vision is incomplete without implementation. And of course the transition of disengaging from white supremacy and self-determining our collective destinies will be fractious and complicated. But that’s the organic process of developing an effective empire, and this path is worth our thorough labor and selfless sacrifice.

As Black people, we need not be imprisoned by “best options” within the context of inherent anti-Black systems. We can build for ourselves. And we need no one’s blessings or approval to do so.