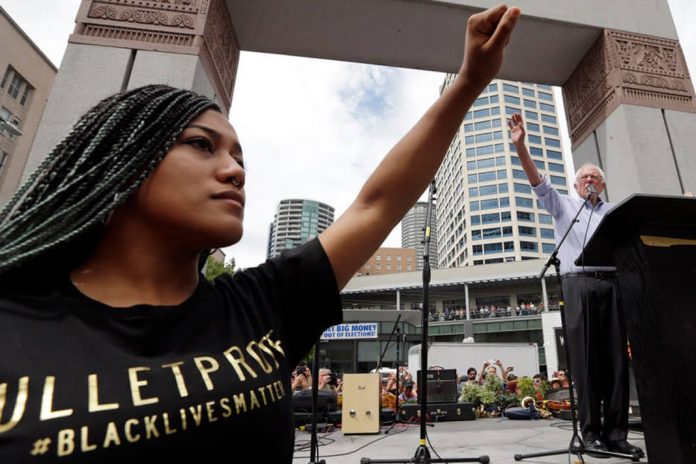 I had some serious writer’s block since I last published. Through a bout of depression, I wasn’t able to formulate or articulate my thoughts and emotions in a manner appropriate for the Blackosphere. When my Black Lives Matter Sisters Marissa Johnson and Mara Willaford strategically disrupted Bernie Sanders in Seattle last week, I was consumed by the vitriol that they (especially) and the BLM Movement (by extension and as a whole) received. White progressives who expressed their anti-Black, white savior strain of racism caused me particular indignation.

But in this moment of reflection, my mood is greatly improving. The think pieces in defense of Marissa and Mara are written with extreme analytical and historical finesse. The rapidity with which the BLM Collective offered our sincere gratitude for, and loyalty to, our Movement Sisters demonstrated our profound commitment to Black Lives and non-respectability. And Marissa is absolutely slaying in defense of herself.

Yesterday, I had the opportunity to speak at the United Nations about the BLM Movement. Before a global body, I closed my remarks with the Assata chant, a Black Power fist, and ase — actions that are revolutionary and revealing in a plethora of ways.

With this, here are some thoughts I have about the world we’re creating.

This is a marathon, not a sprint

I’m neck-deep in Movement work, which creates tunnel vision. I fail to look beyond the initiatives I’m immediately involved in, and am forgetful in making space to honor the all BLM accomplished in such a short period of time. After checking in with the 26 BLM chapters, and hearing about local progress and successful pro-Black strategies, my Spirit was renewed in that I remembered I am not alone.

White progressives are jealous of BLM

After Seattle, I came across a semi-active Occupy Facebook page where the anonymous admin was spewing a bunch of racist bullshit, and incoherent sentiments that exposed their limited talent in political and strategic organizing. And that’s when it dawned on me — there’s some white progressives (maybe those who were involved in Occupy Wall Street) who are not only racist … but jealous, too.

OWS and BLM are similar in that both Movements exist in a decentralized structure and flourishes through shared values, principles, and purpose. But unlike OWS, BLM has made strategic gains, is building political power, and is all around dope as fuck.

The OWS breakdown was, and still is, painful. And I think there’s a palpable faction that harbors that pain and misdirects it at us. Because, in just one year, BLM is continuously making substantive, longstanding, and unshakeable differences towards Black equity — and there’s no impetus to stop.

Take our cause to the United Nations.

I don’t think such an undertaking is the answer — just a next step.

The UN doesn’t center the survival of Black Americans in their global work. There’s a million reasons for this; namely, the US is a principal backer of the intergovernmental body, providing 22% of the UN’s annual operating budget. This enables the US to exert enormous influence and set priorities that advance its social, economic, and political interests.

And then there’s the geopolitical underpinnings; the US — geographically isolated by two oceans and politically consumed in exceptionalism — approaches globalism through a condescending, distrustful vantage point.

And Black American bodies, experiences, stories, and and hardships go unnoticed in the global policymaking stratosphere.

Fortunately, this is changing. In the spirit of the We Charge Genocide petition filed before the UN in 1951, Chicago-based Black activists detailed the horrific conditions of Black people at the UN under the same name last year.

We need to keep pushing our stories before a global audience to ensure that the worldly community acknowledges the unique experience of Black American lives.