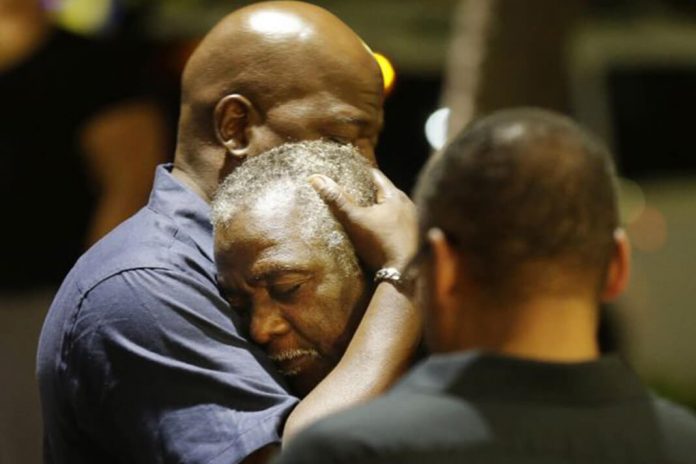 Calling it anything else — especially a #CharlestonShooting is a function of white supremacy. The erasure, the inability or unwillingness to name how a white 20something shooter specifically targeted this central and iconic locale is violent.

At around 9pm, a white shooter unleashed racist hell on the Emanuel AME during a bible study. At least 9 people were assassinated, including State Senator Clementa Pinckney who served as the church’s pastor.

Although little is known at the moment, I strongly doubt this racist anti-Black act of violence was random or spontaneous. The Emanuel AME, preciously nicknamed “Mother AME,” was established and unofficially organized in 1787. By 1822, one founder, Denmark Vesey — a former slave from the Virgin Islands — planned a slave revolt from this specific location.

The revolt failed because George Wilson enslaved physically, economically, socially, and mentally, tipped off his white master. The aftermath was devastatingly structural; the white power structure soon implemented stricter laws, codes, and racist socio-cultural principles to prevent future revolt. Mother AME was burned down. Vesey and 36 others were hanged.

The righteous coup was planned for July. And that’s why this deranged racist shooter targeted this location. That’s why before his deadly racist rampage, he staked out AME’s members and developed a rapport them. “Allegedly.”

The Black church were attempts to create safe spaces from white supremacy. Yet those spaces were still terrorized. #AMEShooting

So no. This isn’t just a #CharlestonShooting. This was a strategic racist attack festered, smeared, and drenched in anti-Blackness. Dominant media narratives will suggest otherwise. Don’t let them. Name this massacre appropriately.

This is American terrorism. But because of whiteness & normalized white terror, it won’t be framed as such. #AMEShooting