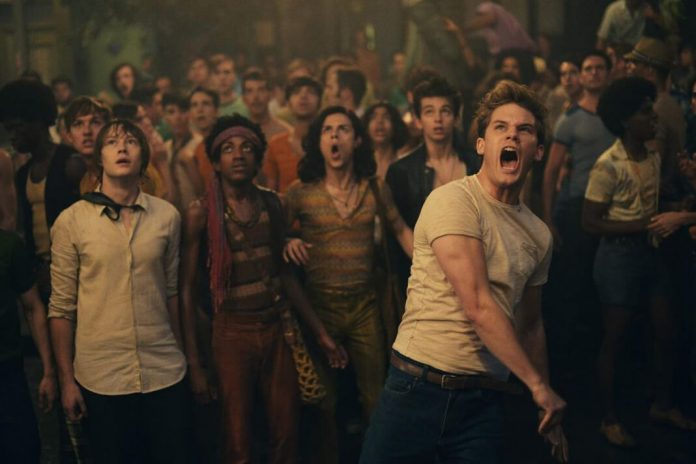 As white queerness moves into the mainstream, there may be certain unearned benefits and advantages that come with being a white gay man in American society.

The highly controversial Stonewall tanked this weekend. Thankfully. The movie — based on the historic 1969 uprising — violently whitewashed Marsha P. Johnson, Sylvia Rivera, and Ms. Major Griffen-Gracy, the three Black and Latinx transgender women who started the iconic rebellion and subsequently launched the modern queer rights movement that we know today.

Except, in recent decades, the queer rights movement, which, in its advent, unapologetically centered the most marginalized in the queer community, has taken on a new cisgender, respectable, white male face. Gay marriage is a victory that’s marketable and relatively easy to come to grips with … but the criminalization of transgender sex workers, inadequate public health services, the lack of job and housing opportunities for transgender folks of color, high rates of HIV and STDs, coupled with the reality of being murdered by lovers, strangers, clients, and police is a suffocating prospect that can’t be printed on a Doritos bag.

Before all you white apologists, well-intentioned liberals, Bernie Standers, and snowchasers (thanks for the term Hari!) flood my mentions with some bullshit, lemme explain.

Privilege refers to the unearned benefits and advantages that come by way of appearance. White and white-appearing folk carry privilege in this white supremacist social paradigm we live in. Intersectionality complicates that white privilege, in that other systems of oppression (heteronormativity, patriarchy, ableism, classism, etc.) may limit one’s access to the privilege they’re both with.

It’s like a bank account and white supremacy is the bank; if you’re a white cisgender straight man, you’re born with $100 in your account. But, if you’re a gay white cisgender man, you’re born with $80.
Of course, this is the most basic understanding of white privilege and intersectionality. I’m assuming that the folks reading this already have more nuanced understandings of white supremacy and its layers.

Gay folks — of all ethnic backgrounds — still face tremendous hardship. It must suck to be gay in Kentucky right now. Hate crimes against LGBTQ-identified people still happen. And hearing political leaders repeatedly admonish LGBTQ folks (like myself) is a form of social violence. Having our gender and sexual inclinations picked apart and refuted by fundamentalist dogma is a fucked up mainstay in national discourse.

But white gay men are making progress where others are not. White queer maleness is becoming the norm, while the rest of us are left in the confines of the Other.

As a director you have to put yourself in your movies, and I’m white and gay.

(Hmmmm …. Effie Brown might’ve been on to something when she said to Hollywood powerhouse Matt Damon that Black folk should be behind the camera as well as in front of it.)

Emmerich’s continued when he also decided to straight-wash the protagonist as a way to appeal to straight audiences:

I didn’t make this movie only for gay people, I made it also for straight people. I kind of found out, in the testing process, that actually, for straight people, [Danny] is a very easy in. Danny’s very straight-acting. He gets mistreated because of that. [Straight audiences] can feel for him.

Robert Emmerich’s motivations reveal two things. First, Emmerich’s whitewashing is emblematic of the contemporary LGBTQ movement that steals the labor and thought leadership of queer and transgender people of color. It’s no secret that the LGBTQ Establishment routinely uses marginalized labor as a launchpad into the corporate mainstream.

Secondly, Emmerich reveals that there are limits to gay male privilege. As gay queer maleness moves into the mainstream, it must be done in a way that is graspable to straight dominance, thus reinforcing a power dynamics that privilege is supposed to tilt in some capacity.

Gay male privilege is still in its beginning stages, and as such, it’s not fully realized just yet. But it’s getting there.

As power dynamics are the undergirding of any socially engineered privilege, gay male privilege may not be able to shift power dynamics against white heterosexuality, but it’s certainly alienating, marginalizing, and oppressing folks of color — particularly Black folk. Gentrification is the prime example as such.

Screen Shot 2015-09-28 at 9.21.20 AM
Recent data shows there’s a tie between gayborhoods and economic push-out of historically low-income neighborhoods.

Here in NYC, entire neighborhoods are being transformed to especially accommodate rich and upper-middle class white gay men. “Gayborhoods” they’re called. Chelsea, the lower Manhattan neighborhood, is a known bastion for white gay men. The Village — the neighborhood where the Stonewall Uprising took place — is yet another NYC locale that caters to white male queerness. Rapidly gentrifying Williamsburg and Bushwick are marketed as gay-friendly. Harlem — a pinnacle of Black creativity — is too rechristening itself as a gay-friendly neighborhood, even though it already was one.

Structural backing is what privilege needs to go into motion. The fact that institutions are starting to mobilize behind gay male queerness is indicative of the social standing that white gay men are starting to hold (and leverage) in society.

And this is one itself isn’t a bad thing — it’s a victory when the underclass is able to undo longstanding oppressive power dynamics for Liberation. My gripe is that this shift is coming at the expense of Black folk and other people of color.
Privilege is less about the individual and more about the structures and institutions in place that support the upward mobility and self-determination of the individual. And that appears to be happening. Yes, Stonewall bombed, but the fact that it was even green-lit in its whitewashed format is symptomatic of a new social design that is accepting of white gay maleness so long as it co-opts and disenfranchises Black queerness.

In similar vein, institutions are also starting to prop up Black gay men, so long as those men chase away from their Blackness.

Lee Daniels, creator of the smash hit Empire, is open about his sexuality. But he uses his platform to promote colorism and respectability, often wagging his finger at the Black community for our alleged homophobia, and demanding that we stop whining about racism and pull ourselves up by the bootstraps.

Don Lemon — the CNN anchor who’s on some other shit — be disavowing Blackness somethin serious. Uncle Don’s job is to hold the microphone on Massa’s steps, and scream at us field negroes to pick the cotton faster… and he’s compensated well to do so. Meanwhile his colleague Anderson Cooper is more gentile and sensitive when reporting on Black issues. But that’s another article for another day.

White gay male privilege is becoming the new normal. And as usual, it’s coming at the expense of Black folk — particularly Black queer and transgender folk — who have the build and maintain the platform, while others see the benefit from standing upon it.