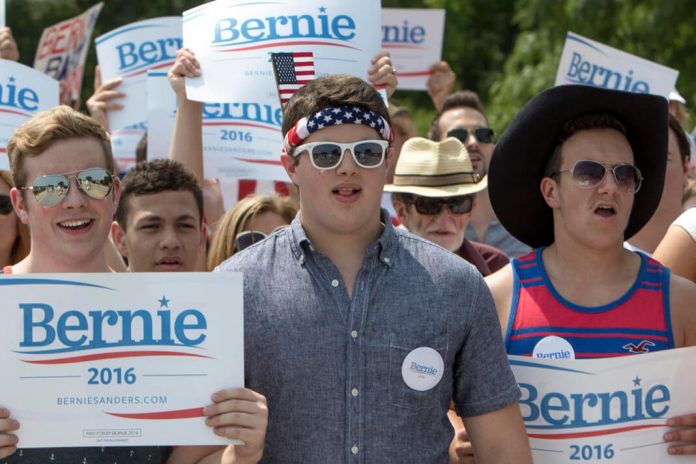 Breakout star Sen. Bernie Sanders of Vermont continues to draw large crowds and gain in national polls. The firebrand socialist taps into the undercurrent anti-establishment ethos that is becoming increasingly palpable as the populace grows disillusioned with the stoic and stubborn two-party system.

In much the same way that President Obama enthused an intersectional base of voters in 2008 by promising new direction wrapped in post-racialism, Bernie Sanders is stirring excitement within a predominately white base frustrated by exorbitant corporate influence, and wealth and income stagnation.

Elected to public office in 1981, Bernie Sanders is considered a political outsider. A registered Independent and self-described democratic socialist, Sanders attracts those rebellious white progressives and radicals that love hacky-sack and Bob Dylan.

Unlike the corporate feminists who cape for Hillary, his supporters are much more paternalistic and arrogant. Why? Because they think that their rebellious, anti-establishment views give them license to shit on everybody else. Especially Black people.

When my Sisters Mara and Marissa disrupted Sanders, his STANDERS came out in droves with their anti-Blackness and white saviorism. Hell, even before then, when a Black person dared to criticize Sanders for his inability to differentiate between systems that oppress based on race and class, STANDERS would come at us with some bullshit.

So this post is for the STANDERS that are hurting the candidate more than we are. The Black vote is up for grabs, and his supporters may be the reason why Black people don’t cast their ballot in his direction. So here’s some things that STANDERS should stop saying to Black people before we go off…

It works best for rich white people, duh. But it also works for poor white people in ways it doesn’t for Black folk. That’s why y’all get the most in welfare and aren’t called lazy. Y’all are called “hardworking.” That’s why presidential contenders come stumping for y’all votes during election season (especially if y’all live in swing states), but relatively ignore Black people.

But now, both Bernie and Hillary are getting their racial justice platforms together. They can now say “Black Lives Matter” without cringing, and can articulate the underlying principles of this burgeoning grassroots movement. They ain’t doing so out of the goodness of their hearts — they’re doing so out of political expediency. They’re doing so because we demanded it.

So full stop with the “Bernie-is-best-for-you” bullshit. We’re best for us. Bernie won’t lead to our Liberation, although he *might* lend to it.

“Bernie Sanders organized with SNCC and marched with Dr. King”
That was over 50 years ago. A lot has happened to Black people since. The nascent of the prison industrial complex. The War on Drugs. The subsequent socioeconomic disparities between Black and white people that have resulted from those racist policies. Gentrification. The rollback of voting rights. To name a few.

Revisionist history limits the narrative of Black existence. American society mandates that we forget that segregation and Jim Crow was a short time ago, and ignore the lasting effects of historical racism. Society also has a sick need to lionize white people who fought racism back then, but lay dormant now.

Black people make up only 1% of Vermont’s population, but are sentenced at 12.5x the rates for whites. The Sentencing Project released a report that showed that Vermont has one of the highest Black to white incarceration ratios of any state in the country.

“The NAACP likes Bernie”
Y’all also seem to think that there’s only one Black voice, and the NAACP represents it. Yes, the NAACP has a commendable track record in racial justice issues, but they’ve had their missteps as well. (Rachel Dolezal anyone?) Its beginnings are also dubious.

No one organization represents all Black people, and to silence us by upholding your view of a good negro is paternalistic and anti-Black, no matter how well-intentioned. So chill.

“I no longer support BLM because y’all don’t support Bernie”
That’s okay…because we’re not fighting for your support. You ain’t that important. We’re fighting for our right to live without racist oppression. If you wanna help, cool. If not, then get the fuck out the way.

Politicians are supposed to be accountable to the public. They’re inherently imperfect because they rep an imperfect system. That means they must constantly be challenged and criticized. And constructive criticism doesn’t immediately mean you dislike a politico. Just their stance, inaction, or whatever one deems a flaw. If we continue treating politics as a popularity contest, then the system will continue to crumble.