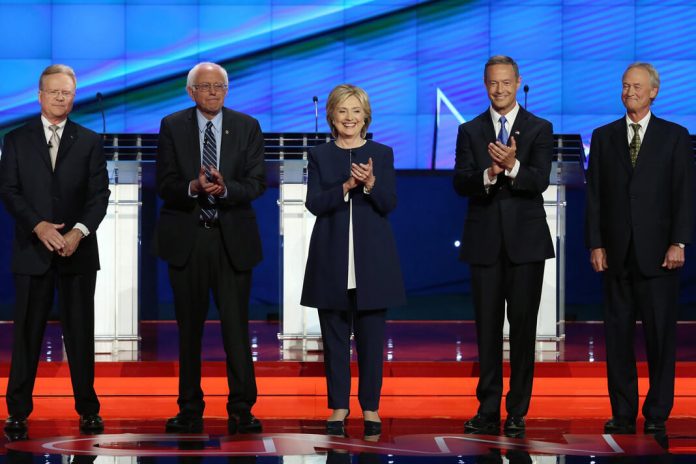 It’s abundantly clear that a Democratic presidential debate solely focusing on racial justice issues is needed. The candidates can barely say “Black Lives Matter” without cringing, are mincing their words to appeal to those low-income centrist white voters residing in crucial swing states, and can hardly articulate a cohesive pro-Black platform that captures the state of emergency that Black lives currently exist in.

The undertaking to perform in a racial justice debate is a daunting one. For the last few decades, the Democratic Establishment regarded the Black vote as a given. But now, as resurgent radicalism is reshaping the national pro-Black politic, Black voters are more aware that the Democratic Establishment colludes with the very systems and institutions that cripple, undermine, target, and brutalize Black bodies. From welfare reform, to tough crime laws and neoliberalism, the Democratic Party has aided in locking us in the socioeconomic underclass.

And that’s exactly why this debate needs to happen. Democratic candidates must answer to the Black voters they’ve ignored at best, and betrayed at worst.

Front-runner Sec. Hillary Clinton has a lot to answer to.
Her ties to the financial sector are repugnant. Major financial firms like JP Morgan Chase, Lehman Brothers, and Goldman Sachs are known to prey on low-income people, most of whom are Black. And these financial behemoths are backing her campaign. How is she prepared to initiate and enforce policies that free Black people from vicious financial burdens, while she’s beholden to the very same entities that profit enormously from the economic crippling of Black people?

Sec. Clinton also has close ties to the prison industrial complex. In 1994, she lobbied heavily for the Violent Crime Control and Law Enforcement Act, a disastrous legislative measure that gave blank checks to local police departments for the purpose of criminalizing Blacks and Latinos. (Fun fact: then Senator Joe Biden was a major sponsor of the bill.)

The effects have been long-lasting. The school-to-prison pipeline, the growth of prisons (both public and private), and structural barriers to employment, education, housing, voting, and public assistance, are direct results of the measure … among others. That’s why its not surprising, nor is it a coincidence, that prison industrialists are bankrolling her presidential campaign.

Long shot Gov. Martin O’Malley needs to explain some things.
As governor of Maryland and mayor of Baltimore, he instituted sweeping zero-tolerance measures that heavily criminalized low-level quality of life infractions. He is directly responsible for mass incarceration, especially among Maryland’s Black youth. And he has no regrets.

Gov. O’Malley created a locale where police had the authority and impunity to roam Black neighborhoods and schools, and arrest at-will. Relationships between law enforcement and the communities that pay their salaries were entirely eroded, and racist corruption was not only incentivized, but celebrated. These conditions led to the murder of Freddie Gray. And O’Malley must tell the nation why he’s okay with that.

Scandal-free Gov. Lincoln Chafee…
I know next to nothing about Rhode Island Gov. Chafee’s racial justice stances. He hasn’t released a platform. And that’s a problem. It’s time he let us know.

The socialist Senator is the only presidential candidate that seems prepared to handle a full on racial justice debate. His answer to the Black Lives Matter question was imperfect, but solid. His racial justice platform demonstrates a sincere and comprehensive understanding of how the conglomerate criminal justice system is detrimental to Black lives. He’s introduced legislation to abolish private prisons. And he’s the only candidate who’s responsive to Black Lives Matter activists. He’s learned from his awkward fumbles.

He needs to address his paternalistic, anti-Black, condescending supporters. They’re terrible. And he needs to check them.

Why I Won’t Watch the McKinney Video

A Guide To The Heathrow Airport Antigen Test