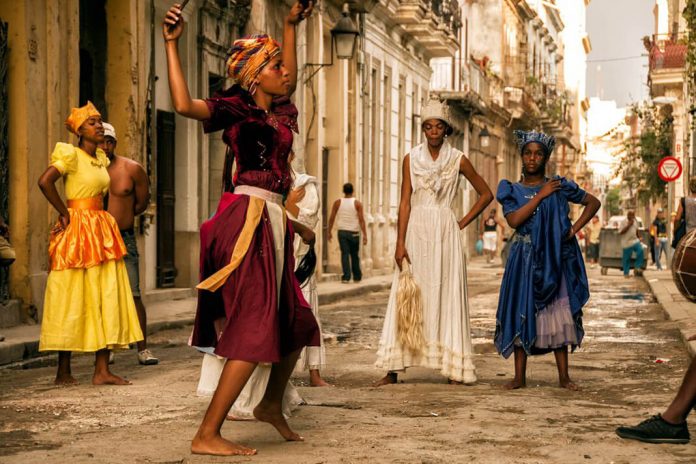 Displaced: to force someone to leave their home, typically because of war, persecution, or natural disasters.

This war being waged on black bodies is resulting in our persecution, and there is nothing natural about this disaster. It is methodological, institutionalized and heavily funded.

As we entered our embassy, which is supposed to serve as our “safe haven,” we found ourselves displaced.

As we nervously walked through a barrage of bulletproof doors and body scanners, the face of a black man on the wall – our Commander in Chief – provided us momentary relief before we entered the main lobby. There, we were reminded of the threat that black women pose to the system.

Posted on the edifice walls, we saw nothing more than a freedom fighting black women labeled a “TERRORIST.” She fought – and continues to fight – against the system so we can breathe.

One million dollar reward for anyone who could return the women in “traditional African clothing” who was part of an “extremist terrorist organization,” read the sign for Assata Shakur.

Mother Assata’s words have saved our lives. When we flood the streets to demand an end to black genocide, her written word is now our battle cry.

“It is our duty to fight for our freedom.

It is our duty to win.

We have nothing to lose but our chains.”

We can’t call Cuba home, and yet we’re weary at the thought of returning to the country that gave us a prerequisite passport to see the world. And within our own embassy, on Cuban soil … we feel displaced.

With tears in our eyes, we ran out the embassy, gasping for air — fearful that we will never be free as long as the United States of America is hunting us.

We now realize that, while our passports make us American, our black experience within the territory is the noose around our necks and the bullets in our backs. Our persecution prevents us from proudly claiming the nationality forced upon us. The daily questions of “where are you from?” have often left us silent and filled with uncertainty.

We are two black women studying in Cuba, and we cannot help but feel displaced. We are here in the midst of an extremely historic time; tourists from all over the world are rushing here to smoke cigars, to see Cuba before the “changes” begin. They’re here to say they witnessed history.

We came here with different intentions.

Heeding the words of Angela Davis, we came here to partake in the revolutionary act of self-care. To take a moment to breathe, to write, to explore and love ourselves in a country rich in revolutionary history, and integral in the global Black Liberation Movement of the 1960s and 70s.

We came here to search for solutions. We came to connect with our Afro-Cuban brothers and sisters whose ancestors — like ours — arrived here in shackles across the Atlantic. We came here to vibe in the empowering reminder that, on a global scale, WE are not the minority.

Our arrival to this space has provided temporary protection from a bullet in the back, only to be struck by the freshly raised American flag that has suffocated us for far too long. As John Kerry raised the flag above the embassy, we struggle to respond as our family and friends excitingly ask us “how does it feel to be witnessing history?”

The only history we feel we are witnessing is the interruption of our breathing space.

The country we were born to can never be home so long as it perpetuates the same conditions that enslaved our ancestors, rewards those who hunt us, and leaves us dead in the street. White supremacy narcissism — because there’s nothing supreme about the system that has waged a war against us, thrives off the persecution of our black bodies, and claims this disaster to be natural.

Jasmine Hall was born in Baltimore, Maryland and graduated with high Latin honors in International Studies, African and Black Diaspora studies and Peace, Justice, and Conflict Studies from DePaul University in Chicago,IL. She is a member of Delta Sigma Theta Sorority, Inc and heavily involved in community organizing through the Chicago Alliance Against Racist and Political Repression.

Moriah Ray is a Baltimore native who recently graduated from the University of Maryland College Park with a B.A in Government and Politics and International Development and Conflict Management.While at Maryland she served as the Vice President of the NAACP College Park chapter and has been extremely active in community organizing in Baltimore,having worked with organizations such as the Safe and Sound Campaign and Pastor Heber Brown.