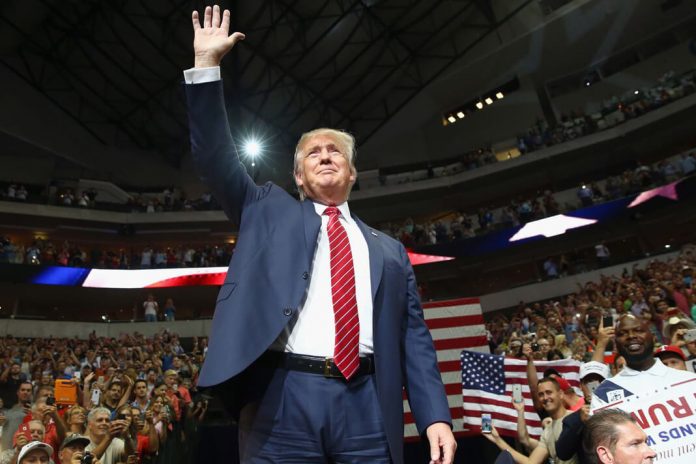 All credible polls show that alleged billionaire and noted harm-doer Donald Trump will lose the 2016 presidential election. Come November 8th, the United States will welcome the first female-bodied president in the form of Hillary Clinton.

Upon his concession in less than a month, he will usher in a freshly-energized raucous base of white supremacists.

With nothing left to lose, Trump’s political operations have morphed into a scorched-earth campaign. In a searing speech recently, he riled up his biggest supporters with anti-semitic conspiracy theories requisite within the ultra-racist white wing.

. . . Hillary Clinton meets in secret with international banks to plot the destruction of U.S. sovereignty in order to enrich these global financial powers, her special interest friends and her donors. So true.

I doubt that the transition of power will be entirely peaceful, with many of his fans promising revolution should Hillary Clinton head the nation.

Trump is stoking these flames by repeatedly proclaiming that should he lose, a rigged electoral system is to blame — an impossibility given the nature and infrastructure of the voting process. In riling up his fervent base, he has called for poll-watchers to monitor the voting process; an eerie remnant of Reconstruction-era Klansmen who intimidated Black voters at the polls.

Be clear that white supremacists are unafraid to executed domestic terrorism. The Waco Siege, Oklahoma City bombing, and Bundy standoff are prime examples of the lengths white nationalists are willing to go in order to advance their political agendas. And never mind the everyday hate crimes that fail to crack national news.

White privilege enables armed white folk (the same ones that jerk off to Confederate flags and obsessively post on Stormfront) to act on their romanticized ideals of government overthrow.

And although those racists willing to take action are in the minority, the majority of white folks are sympathetic to their cause — even if they don’t realize it.

Mainstream cultural punditry pushes the narrative that racism in contemporary American is an anomaly; an irrational thought process held by a select few.

Many white folks hold biases and prejudices against people of color, use racial slurs when they think no one is listening, participate in discriminatory hiring practices, and gobble up the dog-whistling peddled by politicians and media.

The self-righteous liberal ones gentrify neighborhoods and culturally appropriate.

Given the current climate of racial civil unrest, amplified by the Movement for Black Lives, during the tenure of the nation’s first Black president, many of these dangerous combatants are gearing up to exact terror against those who are most vulnerable.

America will be hell.

And that’s why Donald Trump still wins. He has forever, singlehandedly altered the shape and expectations of presidential elections. He obliterated whatever decency within the political system remains. He has emboldened millions of people with his explicit racism, misogyny, ableism, and xenophobia.

Donald Trump amplified the power of white fear. When masses of white folk are terrified of colored boogeymen, they lash out in the most brutal of ways. Lynchings of Black bodies following “abolition.” Japanese internment during World War II. The Patriot Act and the unchecked systematic surveillance of civilians following 9/11.

Donald Trump brought the fear of millions of white folk to the forefront, and there’s no telling how severe this iteration of violence will be.