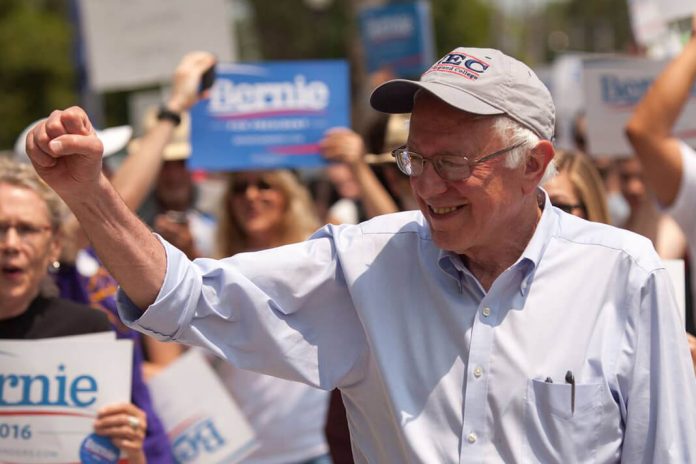 Branding himself the anti-establishment candidate, Sanders has energized an enthusiastic progressive base composed mostly of white voters. To them, he panders an egalitarian vision — an unrealistic battle cry of smashing Wall Street, implementing a single-payer health care system, and making public universities and colleges tuition free.

And yet, his firebrand radicalism stops short when addressing issues especially significant to Black people. Oddly, when Black bodies are the subject of his political aspirations, Sanders is no longer an idealistic visionary — he’s a political technician relying on pragmatic realism.

To Sanders, the issue isn’t that Black folk are owed restitution for centuries of unpaid labor and consequential marginalization. To him, the issue is that society needs to make “massive investments in rebuilding our cities.”

His language is both vague and neoliberal. Calls for community development is coded verbiage. “Massive investments” to improve Black communities often benefit technocrats and industrialists more so than Black children and families.

Sanders’ comments are even more troubling given his unfiltered criticisms of Establishment. He regularly details the unsavory and corrupt relationship between government and multinational corporations. Hell, his entire campaign is anchored on radically curbing corporate influence in government affairs.

And yet, in a stunning showcase of irony, the very system that he’s righteously critical of, is suddenly well-equipped to tackle racial oppression.

I’ve written that I am a disinterested potential voter in this current presidential election.
I’ve been both chastised and praised for my displeasure with the slate of presidential candidates. As a resident of the solidly-blue New York City, my vote means very little compared to the purple voters in Ohio and Pennsylvania.

And yet, the active citizen in me wants to participate in the electoral process. As someone who values primary and local elections, I want to volunteer my resources, skill set, and cultural competencies to a political official who will remain accountable to a comprehensive racial justice platform. As an experienced canvasser, I know my knowledge of pitching, scouting turf, and raising money will serve advantageous to a campaign — especially one operating on a shoestring budget.

I’ve considered volunteering for Bernie’s campaign.
I’ve met volunteers for his campaign who are petitioning to add his name on the Democratic ticket. A strong believer in multiple political options, such is a worthy and commendable cause.

And yet, my energy doesn’t translate to active involvement with his campaign. Because he’s still problematic to me. Overall, his campaign relies on post-racial dogma. In the germinal stages of his campaign, his intense focus on class equity was heavily scrutinized by racial justice activists. Sure economic mobility is crucial to Black folk, but police and vigilantes don’t care about our net worth when they shoot us dead.

And yes, I know he marched — with tens of thousands of others — with MLK.
But through his own admission, his historical activism hasn’t kept pace with contemporary institutional racism. He has not been an vocal critique of mass incarceration and hyper-policing until Black Lives Matter activists radically compelled him to do so.

But, on the whole, Sanders has not been completely expelled from Black millennial support. Some are vocal supporters. Others have approached him with caution or lukewarm praise. Most have raised legitimate concerns, often to the admonishment of brogressives.

And there’s me.
I want to support him, but cannot — just yet. His political positions surrounding racial justice toe the center-left Democrat mantra that has proven to be ineffective at safeguarding Black bodies. Bernie Sanders supports police-worn body cameras. I don’t. Police-controlled body cameras lead to a surveillance state, and allow private companies to profit handsomely off the monitoring of Black people. And given how police control the footage (and disclose damning evidence at their will, or charge exorbitant prices for public access) justice is not often met.

If I am to believe that Bernie is a transformative socialist, a headstrong champion for the working class, and a fearless warrior in the uphill battle against establishmentarian corruption, then his stance on body cameras gives me justified pause.

Bernie does not entirely reflect my political value system.
Voters are expected to choose between the lesser of two evils — to hold their nose and vote for the candidate that adheres to a proximate political worldview. Such a compromise works well if you’re a low-information white voter. Both major political parties ensure that white people remain benefactors in a nation that exploits the global labor of people of color. That’s why Democrats and Republicans alike both strengthen police, tout “tough-on-crime” credentials, and authorize the expansion of prisons.

But as a conscious pro-Black democratic participant, I see the fault lines in most political opportunists. This election is truly a battle between the center-right and the far right. And that’s not a battle I deem worthy or worth it.

If Sanders wants my vote, he will have to work for it. I’m tired of making compromises in a system that hates me.

I am interested in moderating an event that connects Black Bernie Sanders supporters in NYC. If you’re interested, please email me at arielle@blackmillennials.com.